A brief history of the Summer Classic merch and how this year's iterations came to be.

Designing this year’s Summer Classic tee brought back memories of a great moment and turning point in the company. One year before the time of this year’s Second Annual tournament, San Diego Sneaks was just a sneaker reselling shop that had just barely begun to broaden its horizons with thrifted boutique. My childhood friend Tyson Youngs and I had been working to bring our First Annual San Diego Sneaks Summer Classic basketball tournament to life in La Jolla on July 7, 2018. To show appreciation for everybody who signed up for the tournament, we decided to make t-shirts for every single player who had registered as part of one of the twelve total teams. In making the shirts, I had no idea what I was doing - I had never designed a shirt before (besides notebook doodles) and I damn sure did not know the first thing about sourcing and production. But I had always liked clothing and pop culture, and felt that I had good style and taste, so making these shirts was something that I was excited about. 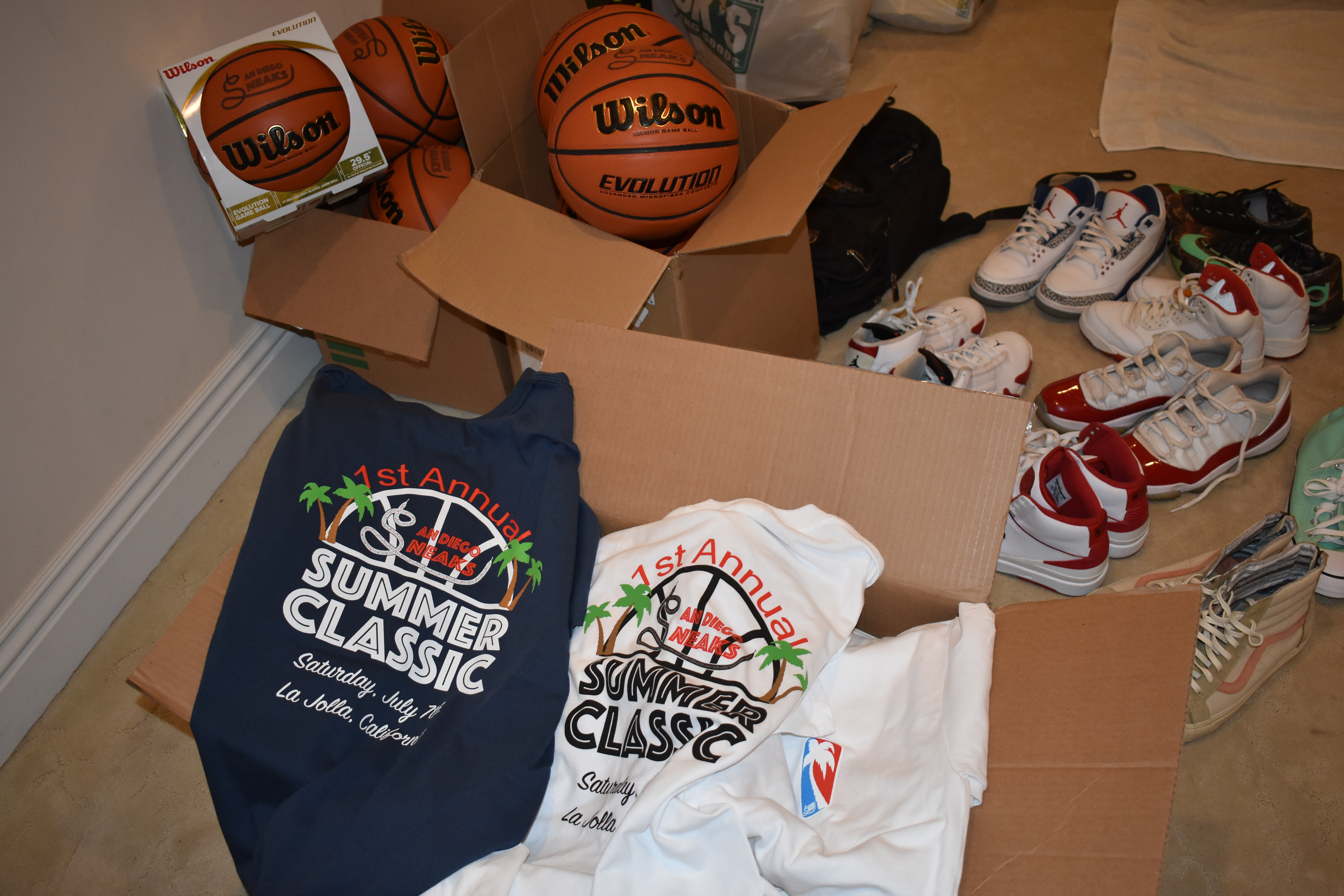 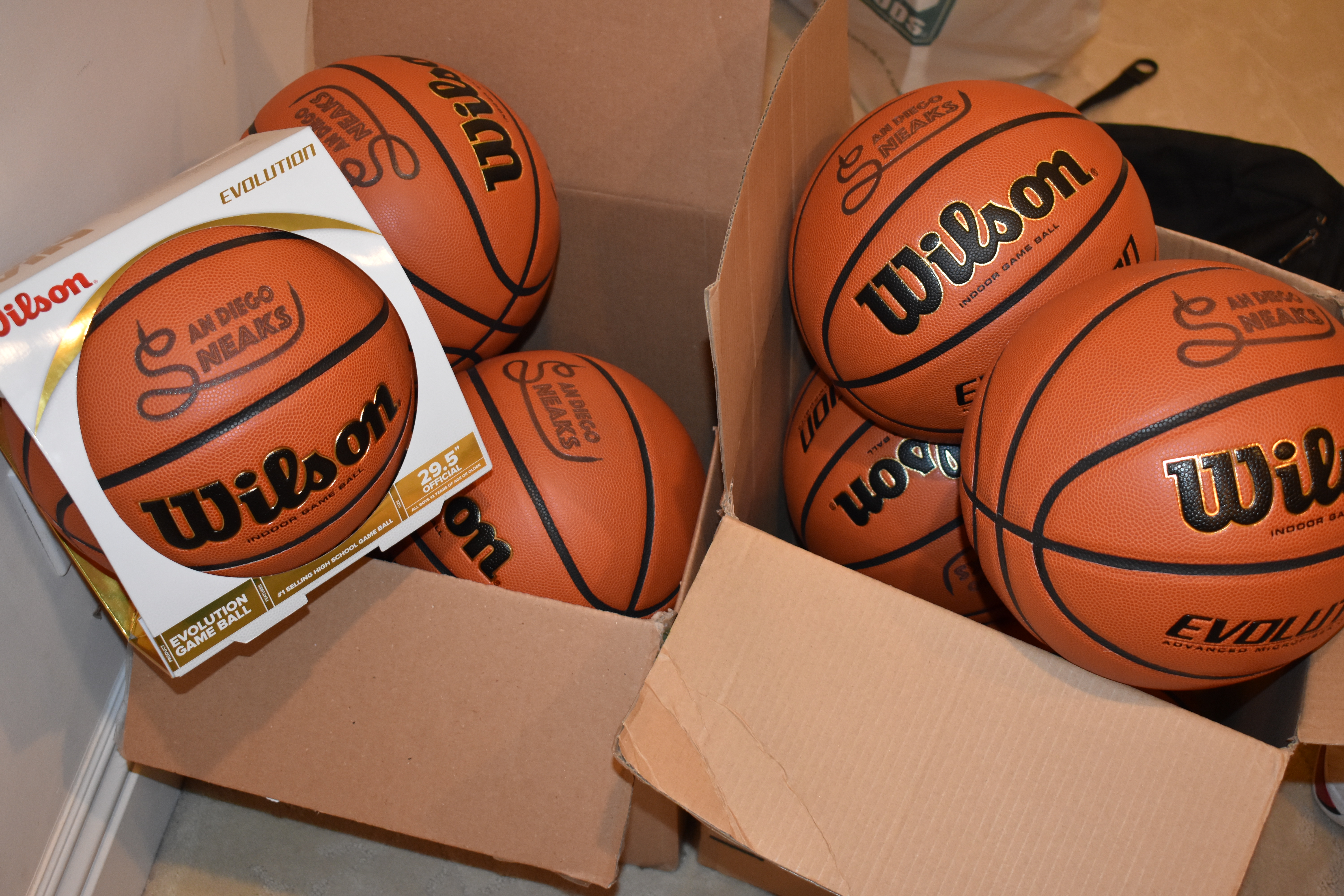 Basketballs engraved with our (at the time) logo. These basketballs served as the prize for winning the tournament

I wanted to make something for the people to commemorate the day by that was something cool and fresh at the same time. The back design was simple enough - I incorporated basketball, my logo (at the time), palm trees (to represent our Southern California roots), and the event info. Finalizing the front design, however, was much more of a process. I wanted one singular logo to capture the essence of this San Diego basketball experience we were creating. I aimed to make a spinoff of the NBA logo, replacing Jerry West with a palm tree and inserting waves and a basketball, underlayed where the red and blue portions of the logo would usually be. Though this design didn’t look great (in hindsight), I thought it was ready for production. I approached a tee shirt company I found off the first page of Google search (shoutout Rush Order Tees in Philly) to produce my design. In full detail, this design consisted of too many colors, and therefore cost too much money to be printed. This turned out to be one of the best happenings in the design process - I made a major simplification overhaul of the design and opted to modify my design to only 3 colors, and less intricate detail. This resulted in a palm tree logo inside a rounded rectangular outline, with my logo (at the time) squished into the small space I had beneath the palm tree. This design was printed on the front of the shirt and the rest was history. Friends, family, and tournament supporters all wanted a shirt, and soon enough I began taking orders to make more shirts for everybody who wanted one. This unplanned moment was the birth of the Sneaks brand as it exists today. We took this momentum and support, mixed with my interest in making clothes and passion for basketball, hip-hop, and Southern California cultures, and never looked back.

For this reason, the First Annual Summer Classic shirts will always be special to the company, no matter how many years removed from the time we get. In the second year, as the first follow-up to our inaugural tee, I wanted to maintain the roots of the original, but also showcase how much I had learned in my year of designing and making products. Last year’s final product was printed on cheaply made shirts that became rough and tarnished after being used a few times. The first design was cool, but I had improved in the long year since the last tournament.

I began with the intent of keeping the main layout intact. From there, I began to work. We had made a new logo for the tournament, which in essence was the brand logo overlaid on a basketball illustration, with a crown sitting on top to symbolize and suggest the glory of winning the tournament. This became the centerpiece of the back, which was completed with the tournament info that built around the main illustration.

The front came from a design for an upcoming Sneaks project that was in the works but had not come out yet. I used the “S’ from the original San Diego Sneaks Shoelace Logo to create our own iteration of an SD logo. I laid this new SD logo over the outline of a basketball and laid it in the same area as the First Annual tee, and the shirt was complete. Our mission with the Summer Classic is to create something cool and exciting for San Diego basketball that our people can claim as their own - something that we built from the ground up, through community. The way the shirt turned out, I’m happy that the first thing you see on the shirt - the front design - is what it is. This is San Diego basketball, our way, and I am happy that everybody who has been here for the start of this tradition we are trying to build can share it with us.

The shorts were something last-minute - unplanned and something that came simply out of me wanting to have something cool, fresh, and unique to wear while I was hooping at our tournament. The night before the tournament, I headed to the shop (shoutout to Daily’s) to grab the new Summer Classic tees, when I thought “Hey, let me bring some shorts I have laying around and see if I can make something cool for myself for the big day tomorrow.” I was planning on printing the same design that I had printed on the back of the tee shirts; after all, the shirts had just been finished, and I figured the screenprinting setup would still be intact. When I got there, all the screens for the design I wanted to use had been broken down and put away. Nightmare! Except not really - the screens used to print the front design - the SD basketball logo - were still set up. Being that it was only hours until the tournament (It was past midnight at this point, and I had to get up at 6 A.M. to set up for the tournament), I just said fu** it and had that design printed on the thigh of the shorts. They turned out to be awesome and they even might have helped me get a bucket or two at the tournament just off that feeling that I had something cool and unique on. It must be the shorts.

With this collection, especially, the clothes are more than just a piece of fabric. They are a representation of the hard work that Tyson and I put into the tournament, and they carry the love of the community that has been there with us and shown support throughout. I wear mine proudly, knowing that every time I put it on my back, I have the strength of our community with me.

Browse all products available for purchase from the 2019 Summer Classic. 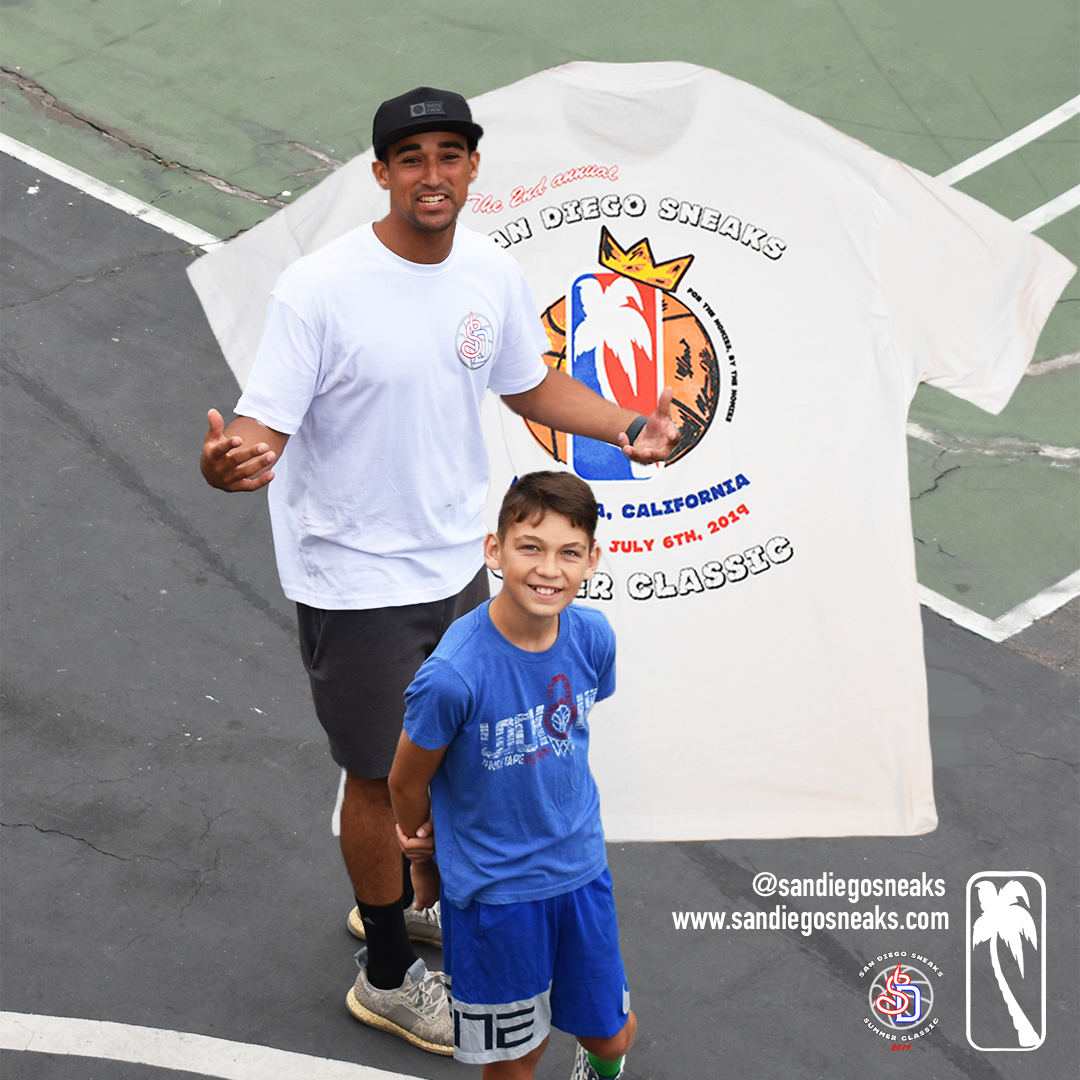